A million miles away... 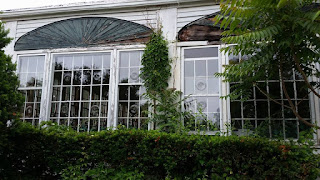 It's been just a little over a year since the last time I wrote in this blog. And a lot has changed in that time, so much that when I look back on a year ago...it truly does feel like I've traveled a million miles away.

When last I spoke to you, I had just lost my cat Magnum. I don't have a cat or any pets at this time. I may get one at some point in the future but finances are not feasible for pet ownership for me. It's also one less thing to have to worry about as well. Pets do bring a lot of joy into people's lives; my cat certainly did for me.

I'd have to say that most of the changes that have taken place between my last blog and this one have been mostly positive. I finally got to have a real vacation for the first time in about ten years, in which I drove by myself to Connecticut. (I'm a Connecticut native but have made Florida my home for the past 34 years.) It was a glorious time away and so well needed. Whenever I had gone north before, I'd always stayed with people and while those times were fun, last year's trip topped them all. I stayed in a hotel and it was great. I loved it. I felt like a true tourist and didn't feel like I was putting anyone else out. The only time I did stay with anyone was in Virginia on the trip back to FL, and that was with an old friend who I hadn't seen for many years. That was also fun in a different way because it afforded us the chance to really get caught up.

I also moved again in November. I wanted to try to live on my own again, have my own space and it's been extremely rewarding. I am an introvert who doesn't mind alone time, I crave it and need it very much to decompress from the world. I also love my privacy as well and unfortunately, you can't always have it when you live with others.

I have finally caught up on my novel writing and have since published two more books. I know that I need to spend more time with my writing. It's been largely ignored due to my pursuit of other things in life. Writing brings me peace and joy and I have chased after the wrong things for these feelings. Which brings me to the next item on my list...

Last May I had decided to try something new. Something that carried a bit of risk and that at the time seemed like a great choice. I'm not a risk taker much. I prefer the safe and less risky ways to go. I have become accustomed to change and even if it's not a change I agree with, I'd say about 90% of the time I can either come around to it or make friends with it and also make the change work for me, rather than against me. I can creatively make a change work very well for me because I have the freedom to put my own spin on it and make it so that it slowly but surely starts feeling like it was my idea all along.

I had decided to drive for a ridesharing company part time on the weekends who shall go nameless at this time. Ridesharing has come up in the past few years and it is driven (pun intended) by an app. You don't clock in and out, you work when you want. I was lured by all of these great videos on YouTube regarding this part time gig as well as very positive comments from others on how this was the way to go and you could make some good money doing this. I don't doubt that but at this stage of the game, you have to know how to play it and 'get your hustle going'. Yeah, so not me. Gheez, I can barely get my hustle going for my own books...yeah, no.

I tried it and lasted longer at it than I ever could have imagined. For the most part, I enjoyed it. I enjoyed meeting the people I drove, learning all of the shortcuts around town that I never knew about and liked getting out of the house. When I first started, it was a blast. I was soon addicted to it and it made my life better. It gave me extra pocket money and it taught me how to handle and deal with the general public. The downside is that it is also stressful and exhausting.

It's become clear to me in the past few weeks that doing this will not be long term. In fact, I am ready to walk away at this moment. The high mileage, the wear and tear on my car, the low pay, the stress of a malfunctioning navigational system and dealing with other bad drivers and high traffic areas...it's not worth it. Kudos for those than can make it work for them. I only did this part time and that was more than enough for me. I also willingly gave up my weekends to drive, missing out on time with friends and family. The benefits of doing this were not enough to keep me in the game. Am I cynical? Yes. Am I realistic? Yes.

I would take away from this a few good things...I got off my butt and tried it. I didn't sit there and wonder about doing it. I did it. I lasted 10 months doing this, which from what I've been hearing lately from a lot of sources is pretty good considering everything I'd mentioned above. But the one thing that was the tipping point for me was the ratings system, set up by this company.

Five stars means you're the best and anything less is not acceptable. Four stars is not acceptable. And anything below that is also not acceptable. The drivers are rated by their riders. I'd say that half of my riders rated me at 5 stars which in MY opinion  is damned good!!! The company would beg to differ. I was polite and kept a clean car. I didn't tailgate, cut people off or speed. I treated my riders like I would anyone else, as I like to be treated. If they wanted to talk, we talked. I asked them many questions about them and they ate it up. I'd say that most of them were pretty damn interesting.

I had two negative ratings for driving and one for cleanliness. Again, out of 248 total rides, that's also damn good. The problem with this is that riders can rate you and also leave feedback and say anything they like. They can lie, they can act entitled to more than they're getting and whatever  negative things they say is always used against you. As a driver, you are not privy to this feedback. You only get a canned response from the company but nothing definitive that you can look at, learn from and try to work at improving.

This completely goes against my philosophy in life. Anytime I have had negative feedback in a performance aspect, I have always been able to have a two way conversation with the critic and have been able to improve from there. I also have been able to use that criticism as a learning experience. But the way that this rideshare company runs in regards to this aspect is something I can't get past.

That being said, I'm glad I tried this. I would have never known if I hadn't given it a chance. The sad part is that part of me is disappointed probably because I expected more. That's the problem with expectations, sometimes they're met and sometimes not. I am grateful for the chance to do this and make it work, if only for a small time. But I also know myself and know that the unhappier I grew, the less chance it had to get better. I also know that I had not failed. I tried it and found that it was not for me. In my book, that's success and not failure.

As the time goes by, I probably will look back at some of this with some nostalgia but there are better things for me, waiting for me and it's time to see what else is out there.